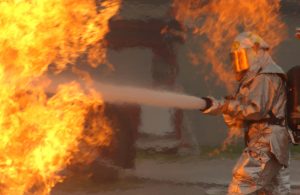 The demonstrations were made possible with the help of the Northern Illinois Fire Sprinkler Advisory Board, a nonprofit organization that focuses on the proven performance of fire sprinklers. They helped local fire companies host a variety of fire and sprinkler demonstrations throughout the month of October. They plan to assist with a total of 53 demonstrations in 2016, driving attention to the important of sprinkler systems and the roles they play in fire safety.

These demonstrations gave the local fire departments a chance to talk to the public about preventing fires, the benefits of smoke alarms, the advantages of sprinkler systems, and fire evacuation methods.

In Illinois, one hundred communities actually require fire sprinklers in new homes that are being built. Illinois has made fire safety a focus in their communities and have established the benefits of sprinkler systems in not just businesses, but homes as well.  If you’re looking to install sprinkler systems in your business or your home, contact Davis-Ulmer Fire Protection Systems, we can help. We are your full-service fire protection company and work with customers in New Jersey, Connecticut, Pennsylvania, and New York.