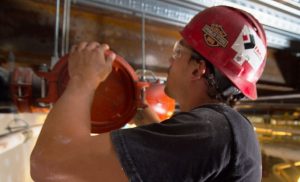 What Problems Does Corrosion Cause?

Letting corrosion go unchecked can cause serious problems with your fire sprinkler system including:

These problems will lessen the likelihood that your sprinkler system will function properly if a fire occurs. It can also lead to expensive repair costs, damage to property and disruption to your business.

In Dry Pipe Systems – Corrosion occurs in dry pipe systems when water is introduced to the pipes. It is difficult to keep the pipes in a dry system completely dry and there is usually some water present. After a dry pipe system is activated or tested, water flows through the pipes and it is a challenge to remove all of it. One way to prevent corrosion in dry pipe systems is through nitrogen interting. This process eliminates all of the oxygen within the system and replaces it with nitrogen so corrosion cannot occur.

MIC Corrosion – There are some methods that can be used to manage MIC corrosion. This includes filling pipes with treated water to prevent bacteria growth and using biocides to treat MIC.