Whether you are at ho 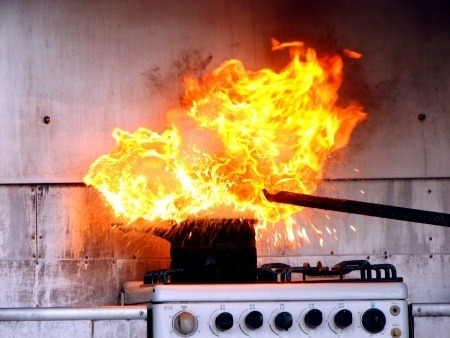 me or in a commercial building when a smoke detector goes off, you’re alerted of a possible fire and potential danger. However, being alerted of a fire will not put a fire out.

Fires can be extremely difficult to put out, and whether one happens in a large commercial building or in a home a smoke detector will only alert you of it, making a sprinkler system your best go-to for practicing fire safety.

Sprinkler systems don’t just warn people of fires as smoke detectors do, they work on putting fires out.

Recently, a sprinkler system put out a fire in Myrtle Beach, South Carolina. A grease fire started when a man was cooking his dinner on the stove and grease splashed out, starting a fire.

The flames quickly spread through his kitchen and melted the microwave and cabinets above the stove, spreading to the ceiling. The flames then triggered a sprinkler head in the man’s kitchen, before the fire could do more serious damage. The sprinkler system successfully put out the fire, saving the man’s kitchen, the man’s home, and possibly his life. According to the firemen in the area, if the sprinkler system hadn’t doused the flames, the fire could have spread quickly causing mass destruction.

In residential areas and developments, homes are often close together. A serious fire in one home could cause damage to a home down the road. In this case, the sprinkler system prevented the fire from spreading to other homes.

If you don’t have sprinkler systems in your home or commercial building at this time, learn more about the benefits of installing sprinkler systems offered by Davis-Ulmer Fire Protection Services. We are your full-service fire protection company and work with customers in Connecticut, Pennsylvania, New Jersey, and New York.