Creating an Atmosphere of Fire Precaution 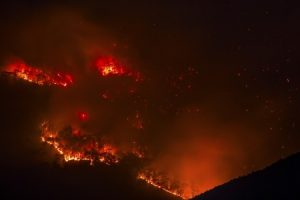 Are fire sprinklers putting out the new normal? We hope so, especially when it concerns El Paso County in Colorado, which is wildfire country – and it has been that way for hundreds of years, long before American settlers came. It is part of the culture and the lore, ingrained in the hearts and minds of the people that call the area home. There is an almost restorative power to wildfire, as some believe it gives life by transforming the landscape so trees can grow. Unfortunately, El Paso County is going through a bit of an identity crisis concerning wildfires, as reported in The Gazette.

Ryan Maye Handy writes, “Fast-forward to the 21st century and those once-healthy forests are overgrown. El Paso County is no longer sprawling ranch land, but one of the most populous regions in the state, where subdivisions have replaced rural landscapes. Nonetheless, the threat of wildfire remains. For two summers running, the Pikes Peak region had disastrous wildfires – the two most destructive in state history. The fires brought waves of change to the county, and to residents a disturbing new normal.”

WILDFIRES CAN BE VERY DESTRUCTIVE

While residents are aware of the transformative power of wildfires, they are overwhelming, especially experiencing two highly destructive ones in consecutive summers. Additionally, the landscape of El Paso County is rapidly changing, going from rural to urban-ish – strip malls replacing forests. This, of course, makes wildfires all the more dangerous; after all, there are more people. Residents have become used to the destruction; for them, it is normal.

To buck this trend of a disturbing new normal, residents must take fire precautions at every step and that means installing sprinklers in their homes. Although sprinklers will not be able to put out wildfires, they will help in the event of emergency, but more importantly perhaps is that having fire sprinklers installed demonstrates a shift in the culture of El Paso County. It creates an atmosphere of fire precaution.

Davis-Ulmer Sprinkler Company is a fire protection expert that serves the Northeast region of the United States.  We have been designing, installing, and servicing fire protection and life safety equipment since 1946.  Contact us today to find out what we can do for you.