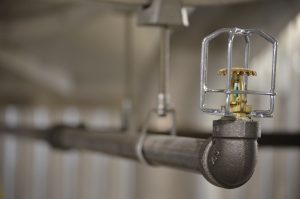 Over the weekend in Falmouth, firefighters rushed to the scene of a service center and took over 30 minutes to put out a fire that occupied a single room. The only reason the fire was contained to just the electrical closet was because of the sprinkler system in the center. It fired off in that room, which helped contain the fire until the firefighters could show up.

It was only after the fire, during a press release that the fire chief stated that the fire would have consumed both the service center where it started and the entire fitness center next door if it had not been for the sprinkler fire suppression system that had been installed. They say the sprinkler system is what saved the lives of the people in the fitness and service center that day, and it’s often over-looked just how important they can be.

The fire suppression system didn’t just save lives though, it also saved buildings. The fitness center had to be closed on Monday, as they repaired the electric, but otherwise it would be up and running in a few days with no problems. If that fire had continued, they would be looking at most of the facility left as charred rubble. Even the service center should have little problem with getting up and running, which means the sprinkler system saved hundreds of thousands in repairs and profits.

This is actually one of the few instances where firefighters are specifically mentioning how important the sprinkler system was to saving people and the buildings from being completely ruined. It could lead to a spike in people looking to make sure their homes and offices have the sprinklers installed. And with good reason. They may just save your life one day.

Davis-Ulmer Sprinkler Company is the premier full-service fire protection company in the New York, Pennsylvania, New Jersey, and Connecticut areas.  Our NICET certified technicians will work with you to give you the fire protection you need to protect for your facility and the people inside.  Fire sprinkler systems save lives, but they also can save a lot on reconstruction costs in the event of a fire.  We have installed fire sprinkler systems in businesses since 1946.  Contact us today to get a quote for a fire sprinkler system today.  We also have a 24/7 emergency response team ready to help you in a time of need.da